Where are Prayer Rooms at Heathrow, Gatwick, Stansted & UK Airports

There are times during travel when people would feel the need to have quiet reflection and prayer. However, a busy and noisy place such as an airport would not be the most inviting place for such an activity. Especially if you’re in one of the most popular airports in the United Kingdom such as London Heathrow, Gatwick, Stansted, or Manchester.

The good thing about airports, though, is that they usually have a dedicated area where travellers can just sit down and reflect. These are usually called multi-faith prayer rooms where everyone, regardless of religion, can have their time to reflect.

If you are in any of top airports in the UK, chances are, you will definitely find a prayer room.

Here’s are the exact locations of the prayer rooms at the London Heathrow Airport (as mper their website):

The London Gatwick airport has two chapels/prayer rooms which can be found in their North and South Terminals. You can find their South Terminal chapel on the 3rd floor level near Caffe Nero, which is before Security. The North Terminal chapel is located at the first floor before the entrance to Hampton by Hilton. The London Gatwick chaplaincy conducts both Christian and Buddhist services.

Stansted airport also has two prayer rooms, which are both located at the Main Terminal building. You can find the first one opposite Check-In Zone A. The other one is located after Security, near the Escape Lounge in the main Departures Area. These rooms are open 24 hours and everyone is welcome to use it. They even offer ritual washing facilities which can be found adjacent to both rooms.

Manchester Airport has four multi-faith prayer rooms that are all open 24 hours a day. You can find prayer rooms at the ground level in Terminal 1, at the check-in area, at both Arrivals and Departures areas at Terminal 2, and at the departures area in Terminal 3. Manchester Airport’s chaplaincy was established in 1980 and have their own Christian, Jewish, and Muslim chaplains. They also provide pastoral and humanitarian care for travellers and also provide support for those who are on pilgrimage. 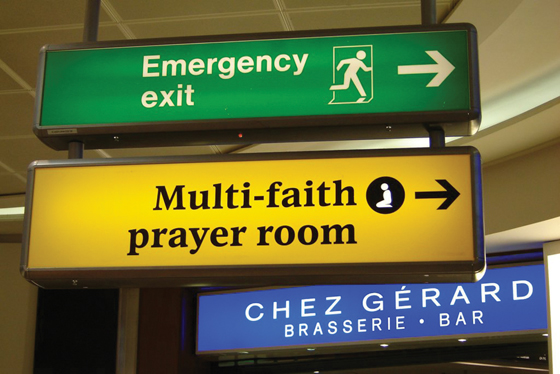 There are a few airports, though, that don’t offer these types of facilities. Of the top 20 major airports in the UK, four of them don’t have prayer rooms. These include London City, Southampton, Aberdeen, and Bristol airports.

Please see table below for more details on the prayer room locations on other major UK airports, which we got from their websites:

Do Airport Prayer Rooms Only Cater to Specific Faiths Only?

Most, if not all, airport prayer rooms would try to be as inclusive as possible and would make the rooms readily available for everyone regardless of their faith or belief, or even no faith.
Prayer rooms are intended to be used by everyone, whether it is for deep prayer and meditation or just for reflection.

Hot Deals delivered to your Inbox!